Contemporary flutes are still made from materials such as the ones listed above, but also from imported hardwoods such as teak, ebony and padauk. Plastic, ceramic and glass flutes also exist. 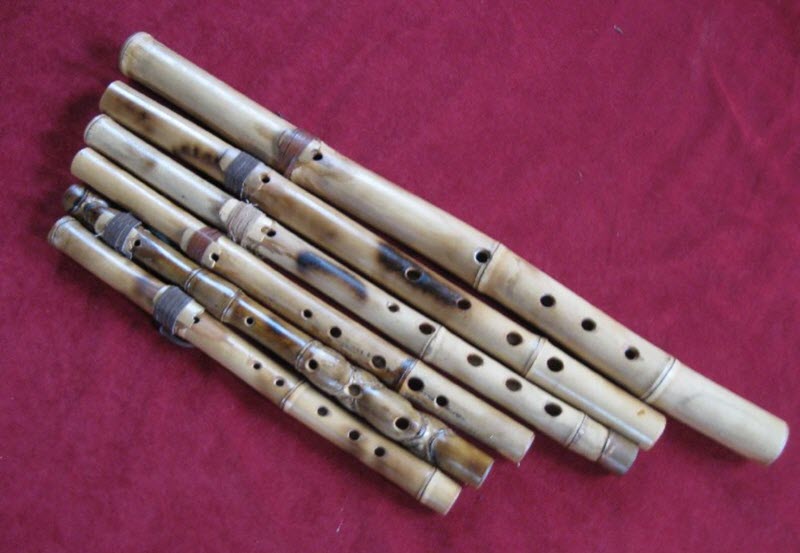 A branch flute is made from the branch of a tree. The flute maker splits the branch down the centerline, hollows it out and then put the halves together again.

Quite a few traditional flute makers will size the flute in accordance with the intended player´s body. The flute will then be as long as the distance between the tip of the index finger and the inside of the elbow. The length of the slow air chamber, the distance between the sound hole and the first finger whole, and the distance from the last finger hole to the end of the flute will all be equal to the width of the player´s right fist. The finger holes will be spaced according to the width of the player´s right thumb.

The Native American flute will usually have five or six finger holes, but other configurations do exist, including the seven finger flute.

Some flutes have a finger hole for the thumb.

The flute end closest to your mouth is the Head End, also known as as the Top End and the North End.

The other flute end is the Foot End, also known as the Bottom End and the South End.

The two chambers are separated by an internal wall inside the flute.

The sound chamber has the sound hole and finger holes.

A double flute has two sound chambers that can be played simultaneously.

A multiple flute have at least three sound chambers.

The finger holes are open, which means that there are no levers, pads or similar coverings.

Direction holes can be present on the foot end of the flute. They derive their name from the four cardinal directions (East, West, North, South).

The block sits on the outside of the flute and can be removed. A strap ties it to the flute. The block is often in the shape of a bird.

Some flutes have a spacer plate

Some flutes has a spacer plate between the removable block and the flute´s nest area. In most cases, the plate is held in place by the strap that also holds the block.

The spacer plate gives the player an additional degree of control over the sound of the flute.

Native American courting flutes are sometimes divided into two categories – Plains Style and Woodlands Style – but sources do not aggree on any definition for these categories.