A clapper stick is a traditional instrument among several Native American peoples of California, USA. It is an idiophone instrument, which means that it creates sound primarily by the vibration of the instrument itself, without the use of air (as is the case with aerophones), strings (chordophones) or membranes (membranophones).

Also known as clap-stick and split stock rattle in English, this instrument was traditionally made from the branch of an elderberry tree. The branch is hollowed out and partially split in two.

The clapper stick is typically used to accompany and keep pace for singers and dancers.

Modern clapper sticks are often made from bamboo instead of elderberry since the bamboo is naturally hollow.

Since the clapper stick is and has been used by many different Native American peoples of California, it is known under many different names. Here are a few examples:

The Native American eagle-bone whistle is a religious object rather than an instrument used for entertainment purposes, and it is used in various sacred ceremonies carried out by several different Native American peoples. It is especially associated with the Southwest and Plains cultures. 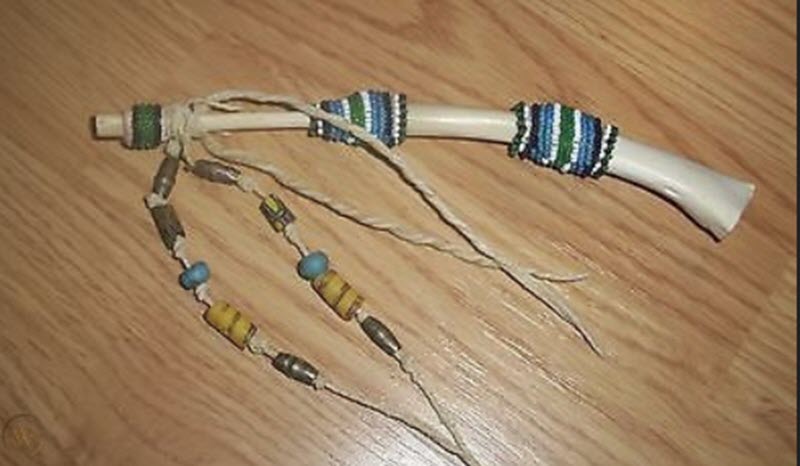 This religious object is made from the bones of an American bald eagle or an American golden eagle. Both species are protected by federal U.S. law, but exemption permits can be issued and are sometimes granted to enrolled members of federally recognized Native American tribes to allow the use and ownership of eagle-bones for religious and cultural purposes.

A footed drum is a type of membranophone traditionally used by certain Native American and Polynesian peoples. It is made from hollow wood or bone, is held by the feet and has an open area at the bottom which adds resonance.

Archaeologists working in North America have found very old foot drums in several Native American archaeological sites in southwestern and central Californa; sites associated with the Aztec, Hopi, Maidu and/or Miwok. These unearthed drums are typically semicircle cross-sectioned hollow logs laid over wood covered resonating pits. They can be played by stomping on the top of the hollow log, while poles are used to steady the drum.

Certain footed drums were used in the great kivas of the Mesa Verde region. The great kivas were large and partly subterranean rooms, typically fitted with a bench that encircled the inner space. Most known great kivas have floor vaults, and these floor vaults are believed to have been used for drumming during ceremonial footed drum dances.

The tinya, also known as kirki, is a pre-Columbian percussion instrument used in the traditional music of the Andean region. It is especially strongly associated with the Peruvian Andes, and both tinya and kirki are Quechua words.

The tinya (kirka), which is a small handmade drum made from leather, is still commonly played at Peruvian dances. One example is the Los Danzanted de Levanto, a dance where the tinya is played together with the antara (siku) pan flute. 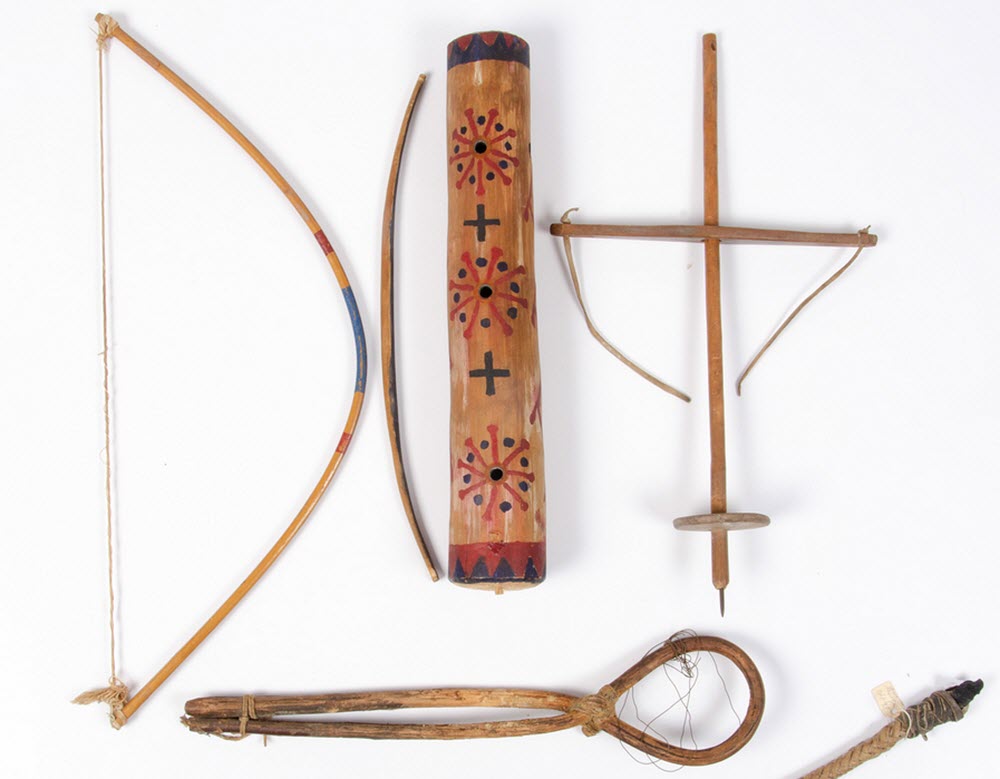 The tsii’ edo’a’tl is made from the stalk of an agave plant, mescal plant or similar. One or two strings are secured at both ends of the stalk. These strings are usually made from horsehair. A bridge and nut is added.

The tsii’ edo’a’tl is played with a bow resined with pine pitch, and the player will touch the string(s) directly with his or her fingers to change the note.

One notable contemporary maker of tsii’ edo’a’tl is Chelsey Goseyun Wilson (b. 1932), who grew up at the San Carlos Apache Indian Reservation in Arizona where he learned to play and make Apache violins and Apache flutes from his uncle Albert Goseyun. Wilson is also a direct descendant of the noted Apache musician Amos Gustina. In 1989, Wilson received the National Heritage Fellowship, which is the United States government’s highest honour for the field of folk and traditional arts.